ORG. CHART
CV'S DIRECTORS
MEMBERS OF THE BOARD OF DIRECTORS
CAC MEMBERS 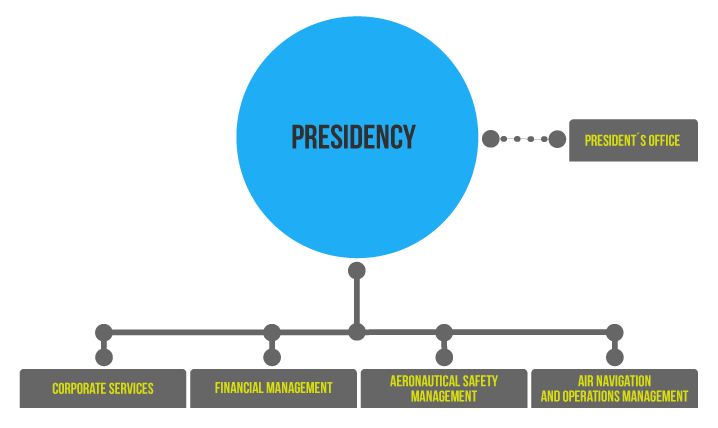 Aeronautical Engineer (Airports and Air Navigation) from the Polytechnic University of Madrid (UPM).

He has spent his professional career at the Transport and ICT Directorate of ISDEFE, working in projects such as the SACTA Program office for ENAIRE and the opening of the new Barcelona-El Prat Airport terminal. Recently, he has been responsible for coordinating the participation of ISDEFE in the Single European Sky (SESAR) program and other international air transport initiatives.

Member of the Official Register of Financial Auditors as well as of the Spanish Institute of Chartered Accountants.

Specialist degree in Accounting and Auditing from the University of Alcalá de Henares (Madrid). Instructor of ICADE.

He has worked for the Audit Unit PricewaterhousCoopers in Madrid from October 1999 until June 2012, where he has served as senior manager and has specialized in audit works of listed companies and societies under US GAAP accounting.

During the period January 2007 to August, has participated in the ATP international project on the design of tools and implementation of new audit methodologies in Stamford (Connecticut), Tampa (Florida) y San Jose (California).

Director of Air Navigation and Operation

Master in Business Administration in Aviation from IADE (Universidad Autónoma of Madrid).

Engineer at Operation Services of Autonomous Organization of National Airports.

Head of Engineering Department of AVIACO Airline. Since 1998 has held several positions in SENASA as well as, Technical Director, Director of the Flight Simulators Unit , Director of Technical Coordination, Director of Maintenance and Operations.

Member of the Official College of Aeronautical Engineers of Spain and of the Infante de Orleans Foundation.

He has worked as an Airport Operations Engineer at INECO and as Chief and later Project Manager, also at INECO, for the certification of the AENA Airports network. In September 2014, he joined SENASA as an Expert Consultant, and from 2017 to April 2020, he held the position of Air Navigation and Safety Analysis Manager, at the Aeronautical Safety Management, being responsible for supporting the Spanish Aviation Safety Agency (AESA), the Civil Aviation Accident and Incident Commission (CIAIAC), as well as Strategic Consulting projects for ADIF.

She belongs to the Superior Intervention and Accounting Corps of the Spanish Social Security Administration since 2001.

Vocal Administration and Budget Advisor of the Secretary of State for the European Union of the Ministry of Foreign Affairs, European Union and Cooperation (November 2019 to March 2020).

Previously, she has served as Head of the Department of justification of subsidies of the Economic Department of the General Secretariat of the Spanish Agency for International Cooperation for Development (July to October 2019), Economic-Administrative Counselor of the Embassy of Spain in Washington (2014-2019).

Director of the Management Control Division of the Foreign Service Directorate of the Ministry of Foreign Affairs and Cooperation (2009-2014), Head of Economic Planning Area of the budget office of the Ministry of Culture (2006-2009) and Chief of Delegated Intervention Service in the Central Services of IMSERSO (2003-2006).

MEMBERS OF THE BOARD OF DIRECTORS

MEMBERS OF THE AUDIT COMMISSION